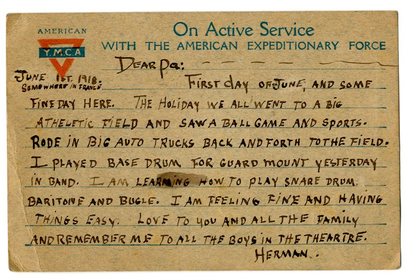 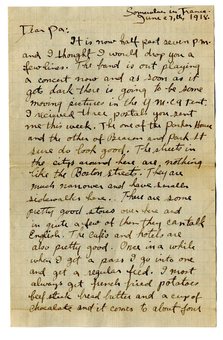 Date: June 7th, 1918
Addressee: Father (James Allen) Still in France
​
Summary: Again, he talks about the band playing in a concert near him, because James is a musician and that’s what he’s interested in. He talks about his the views of surrounding areas (french cafes that speak English, hotels, people visiting the soldiers and watching them eat, what he buys (objects and food) and how much they cost, etc. 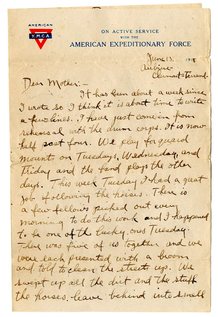 Summary: Herman hasn’t written his parents in a while, so this letter is an update on everything that has happened to him in the past week. He talks about the different jobs that he does in the military, the people from his hometown that he meets, where he is, his upcoming dental appointments, and finally asks for news from home. 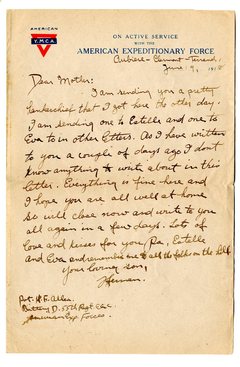 Date: June 19th, 1918
Addressee: Elizabeth Allen, Mother
​
Summary: Herman warns his mother that he is sending her a handkerchief, as well as one for Estelle and Eva. It’s a rather short letter, as his last letter was 7 pages long, and he does not have much else to say. 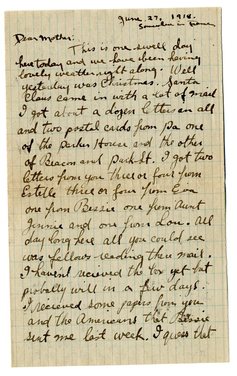 Date: June 27th, 1918
Addressee: Elizabeth Allen, Mother
​
Summary: Herman excitedly writes about mail day, otherwise known as “Christmas” to the soldiers. He enjoys getting mail from home and reading the news they have to share with them. He goes about his life and tells his mother every detail, like what he’s eating, where he’s playing music, and more. 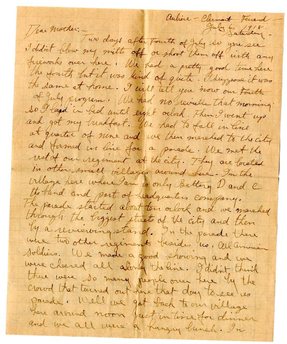 Date: July 6th, 1918
Addressee: Elizabeth Allen, Mother
​
Summary: Tells his mother about his 4th of July. He was part of a parade that marched the biggest streets of the city with another regiment. Herman was shocked about how many people had showed up to watch the parade. Afterwards there was a big field day where they played ball and other games. They then went to a concert and were able to stay out later than usual. 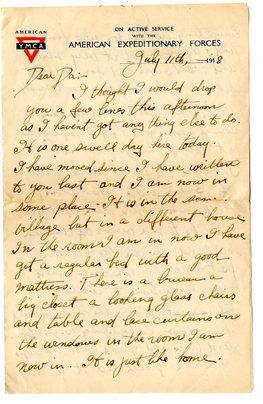 Date: July 11th, 1918
Addressee: James Allen, Father
​
Summary: This letter says about the same thing as the one to his mother. He briefly talks about the fourth of July parade and how they were cheered all along the way. He received the box they gave them and enjoyed a “good smoke.” He talks about “Charlie Chet and Ripley” and how they are drilling all the time. 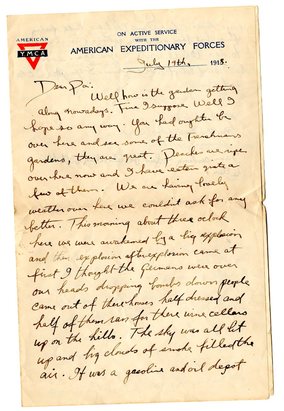 Date: July 19th, 1918
Addressee: James Allen, Father
​
Summary: There was an explosion below their village. It was a gasoline and oil depot that blew up. The explosions lasted about an hour and a half and woke all the men up around three. None of them were too worried and went back to bed after checking what it was. Momentarily, Herman thought it was Germans bombing them from the sky. 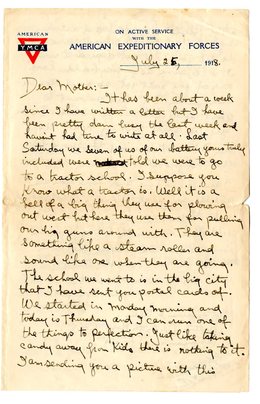 Summary: In this letter Herman Goes to tractor school, discusses people “raising the devil” at his camp late at night,  signed some papers that gives some of his money to his family(about 30$ a month).  All the men are joking around in their bunks, having a good time. ​ 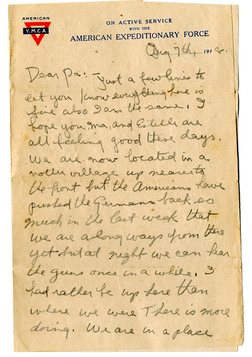 Date: 8/7/1918
Addressee: James Allen, “Pa”
​
Summary: Herman at first talks about the success the Americans are having in the war and then goes on to talk about his parents’ homelife. 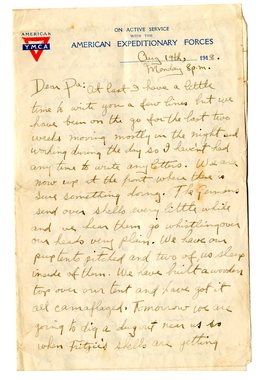 Date: 8/19/1918
Addressee: James Allen, “Pa”
​
Summary: Herman describes his daily routine to his father which consists of building adjustments to his tent, eating doughnuts, and getting ready to dig dug outs the following day. Herman also describes his friend Basil’s condition after being shot in the arm. 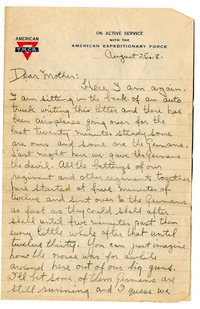 Date: 8/25/1918
Addressee: Elizabeth Allen, “Ma”
​
Summary: Herman describes the success his unit has had for the past few days against the German forces and some artifacts he finds among the battleground such as a German helmet. Herman illustrates an image of heavy, non-stop fire by the American forces to the German forces. 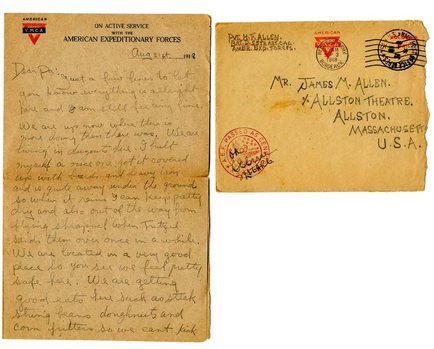 Date: 8/31/1918
Addressee: James Allen, “Pa”
​
Summary: Herman proudly explains the dugout he made for himself along with the good food he has been eating. He mentions his friend Charlie, who he hasn’t seen in awhile. Herman explains that he will get a gold service pin for his time in the war (almost six months).