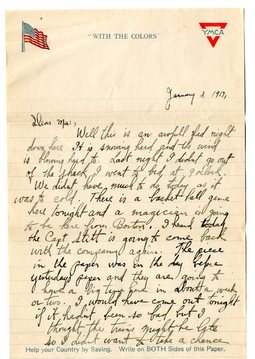 Summary: There is a horrible snow storm. There wasn’t much to do because it was too cold the previous day. There is a basketball game and a magician is coming. Captain Stilt is coming back. Herman is a little bit sick, but his cold is recovering and on an unrelated note, he is going to the dentist. 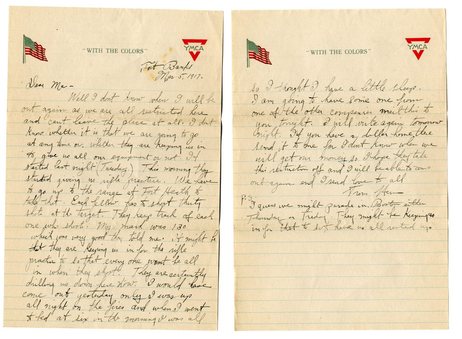 Summary: Herman explains that he can’t leave. He doesn’t really know what's happening or why he can’t leave. Herman takes part in rifle practice at Fort Heath. He hits 30 shots at the target. His mark was 130. Herman was hanging around the fire and went to bed at 6am. Herman asks mother for money because he doesn’t know when he’s going to get paid. Herman wants to get out again. He describes plans to parade in Boston later in the week. 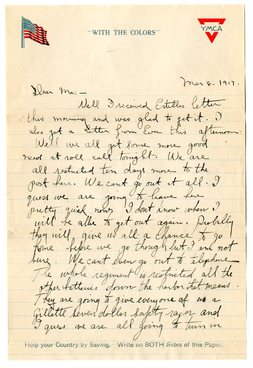 Summary: Another restriction, he talks about how nobody can leave. They are all going to get a gillette 7$ safety razor, and they are turning their rifles in for revolvers. They were practicing shooting at Fort Heath, they are shooting at targets 200 yards away and out of sight, and they have to communicate to aim the shots by telephone. They hiked to orient heights and back. They took the bunks out and washed the barracks. Inspection is the next day, they have to shine shoes, wash leggings and clean rifles. Ma might be able to come down another time. 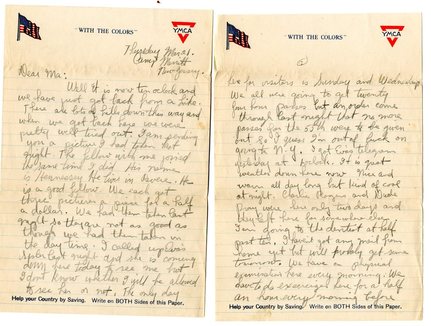 Summary: Herman found some friends who joined the same time he did. Herman wanted to go to NY but they are not giving out any more 24hr passes so he can’t go. He describes the weather as nice and warm during the day but cooler at night. Charlie Rogers and Nicole Pray came and left. Herman is going to the dentist again. The men have a physical examination every morning for 30 minutes before breakfast. He gives his mother a new address because he thinks they are moving out. Eva’s sister visits him and brings him some cigarettes. 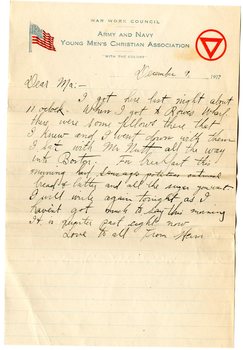 Summary: Got the Rowes Wharf late at night. Met up with some guys that he knew. Sat down with Mr. Nutt on his way to Boston. Had potatoes, oatmeal, bread and butter, and “all the sugar you want” for breakfast. 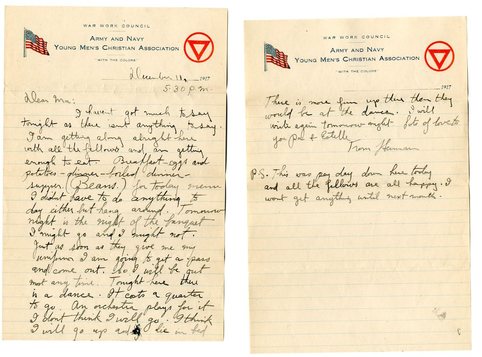 Summary: He does not have much to say today.  He had eggs and potatoes for breakfast and boiled supper (Beans) for dinner.  He didn’t have to do anything today.  Tomorrow is the banquet, but Herman doesn’t know if he is going to go.  When he gets his uniform he will get a pass to go out.  There is a Dance, but he is not going to go (costs 25 cents or $5 today), he is just going to lie in bed.  He will write again tomorrow night.  It was payday so a lot of men got paid, but Herman won’t get money until next time. 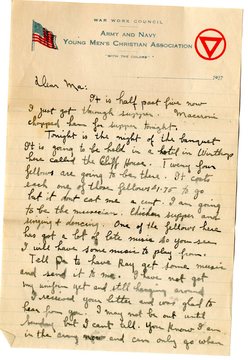 Summary: There is a banquet being held in Winthrop, costs 1.75 per person to go. The banquet is held at a hotel. 24 fellows are going, but he is going to be the musician there so he gets in for free.  He needs Pa to send him some music for him to play. He has not gotten his uniform yet, and he might not be out until Sunday. He can only go out when he gets a pay, but he hasn’t asked for one this week because he is expected to get pass.

Newspaper clipping 1, poem: No one is bringing home souvenirs but they will come home alive
Newspaper clipping 2, song: The coast artillery will bring Germany down and is stronger than people think.
Newspaper clipping 3: A tribute to the members of the 26th and 55th regiments, particularly those who gave their lives to the war. 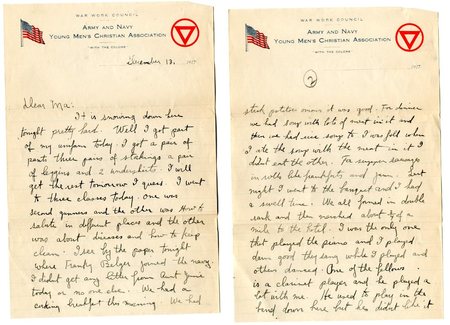 Summary: Herman got some of his uniform and will get the rest the following day. Herman is taking some war classes. He did not get any letters from Auntie Jennie. He had steak potatoes and onions for breakfast and meat soup and rice soup for dinner. He went to the banquet and had a swell time there playing the piano. He describes a friend who played the clarinet in a band but quit to get into the army. There is another basketball game against a boston team. Herman signs off. 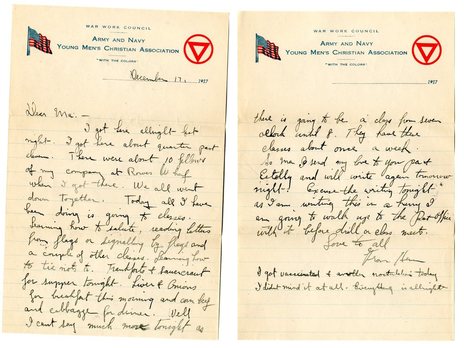 Place: Rowes Wharf
Date: December 17th 1917
Addressee: Ma
​
Summary: Herman arrives at 10:30 to Row’s Warf. Herman is going to classes all the time. Liver and Onions for breakfast. Cornbeef and Cabbage for dinner. 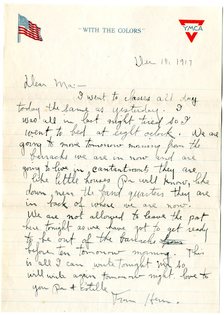 Summary: He went to classes all day. They are moving from their barracks and going to move into little houses behind the barracks. He is not allowed to leave the post that night because they are moving the next morning at 10am. 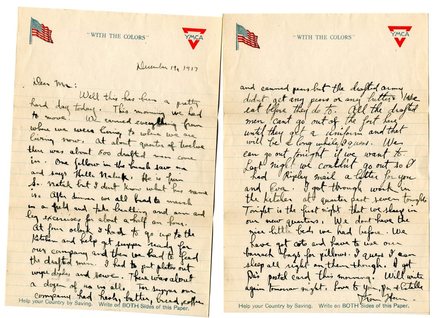 Date: December 19th, 1917
Addressee: Ma
​
Summary: Moved to somewhere new. Met someone from South Natick. Did exercises, then cooked and ate supper. Drafted men can’t leave and eat less, after. Wrote letter for Ripley(?) to mail. Beds are worse.
Key excerpt: The drafted army didn’t get any peas and any butter. (Shows discrimination against the drafted) 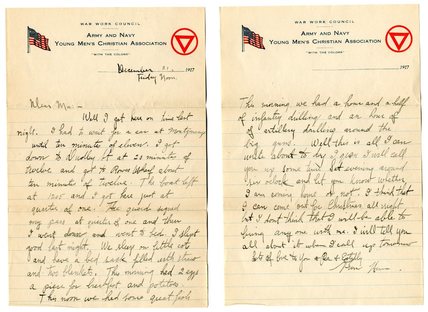 Summary: He got back to camp on time last night. He took a car from Montgomery and got to Dudley at 20 minutes of 12, and got to Rowes Wharf at 10 minutes of 12 and the boat left at 12:05, he got back just a quarter of 1, the guard signed his pass.  He slept well last night on his cot.  He had two eggs for breakfast, lunch he had fish.  They did an hour and a half of infantry drilling and an hour of artillery, This is all he can write about today, he will call them up tomorrow to tell them if he can come home, and he wants to find out if he can go out for Christmas. 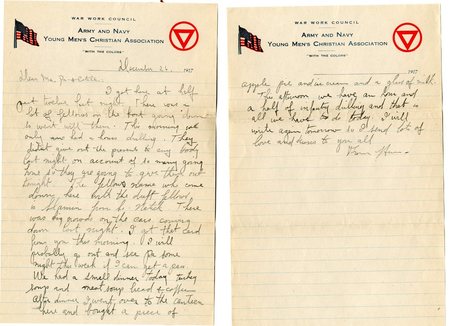 Summary: Herman  talks about how presents were not distributed because so many people were visiting home. Herman Allen bought apple pie with ice cream and a glass of milk from the company shop. He only has to do an hour and a half of infantry drilling this day. 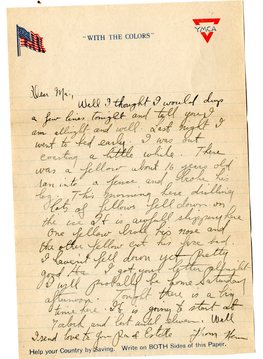