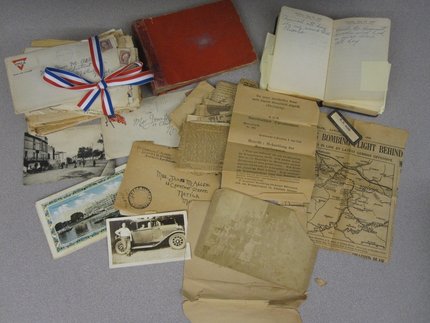 Exactly ninety-nine years ago today, June 1st, 1918, an American Expeditionary Force artilleryman wrote to his father back home in eastern Massachusetts.  While fierce A.E.F. fighting raged during the German spring offensive, Herman Allen of Natick and Wayland grabbed a pen and a YMCA postcard and reassuringly reported that he was “feeling fine and having things easy.” Indeed, the 55th Coastal Artillery Corps had yet to enter the fray, and Herman instead “saw a ball game, [and was] learning how to play snare drum, baritone and bugle.” He signed off, sending “love to you and all the family.”

Herman's short note is but one in a cache of some 90 letters he mailed over the course of an 18 month tour, and drawing from them the Wayland High School History Project team set out to research and tell his story.  The collection, treasured by his mother until her 1950 death, eventually ended up in the hands of Korean war era veteran John Dyer, who later passed them on to forty-six eleventh grade US history students.

Using a wide range of sources, we present to the public a biography of an everyman who loved his family and his country. Using his own words, we breathe life back into Herman, who now rests at Cochituate’s Lakeview Cemetery. As with each of our projects, we provide all of the evidence, including census and military records, newspaper accounts, Town Report excerpts, and 200 scans of each multi-paged letter home to his father James, mother Elizabeth, and sister Estelle.

Click on and read the story of the life and times of an ordinary fellow and active citizen who perfectly represents middle America a century ago.